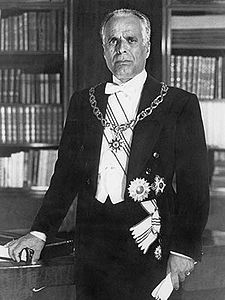 In the middle of the 20th century, Habib Bourguiba created the Republic of Tunisia and become its first president. Habib had fought for independence of the Tunisian Republic and succeeded in releasing the Tunisian people from the oppression of the French government and the monarchy of the Ottoman empire at that time. He was the leader of the developing nationalist movement and he devoted himself to liberating this beloved land from colonization and dictatorship. Thanks to him, an optimistic visualization of the future was introduced and there was a glimpse of hope of a modern independent Tunisia. As a result, the voice of nationalism rose among civilians of the new republic to realize the dream of a free nation.

Habib Bourguiba was born on August 3rd, 1903 in Monastir 100 miles south of the capital Tunis.  He was the youngest of eight siblings. His close relationship with his mother and sisters during his childhood had a dramatic effect of his personality and affected future decisions during his political life. Studying for several years in a modern western city such as Paris, helped him to nourish his vision and supported his opinions about women’s right. This Tunisian president was a man with foresight and strong determination to help his country to overcome the age of “stone period” and to create a “real state” with modernized ideas and modified beliefs.

On Aug 13, 1956, Habib Bourguiba gave a famous speech dedicated to the Tunisian women in which he paid special homage to their effective role in the journey of the Tunisian independence. During this speech, inspired by Tahar Haddad’s determination and Mustafa Kemal Atatürk’s vision, Bourguiba announced that he had issued a Code Of Personal Status (CPS), called ‘majala’ in Arabic. The ‘majala’ is considered the most contemporary and advanced family law of all times in the Arabic world.

Thanks to the Code Of Personal Status, multiple rights  had been given to the Tunisian women in different fields such as:

·         The establishment of legal equality between men and women in the case of divorce.

·         The abolition of the right of a father to force his daughter to marry against her will.

·         The right of being a principal guardian of minor children regardless of gender.

·         Renovations of the inheritance laws to improve protection of the rights of women.

Furthermore, education was an important element in Bourguiba’s strategy to shift the traditional Tunisian way of thinking towards women. He established many coed schools and encouraged families to enroll their daughters. Hence, on one hand, these achievements helped the Tunisian women to gain many rights and equality in the society. On the other hand, women’s education helped women to enter the work force which led to the later spectacular economic success.

Thanks to Mr. Habib Bourguiba’s vision and achievements, the republic of Tunisia became a better modern place to live in and a safer land to walk on. The Tunisian women owe him the status and rights that they enjoy today.